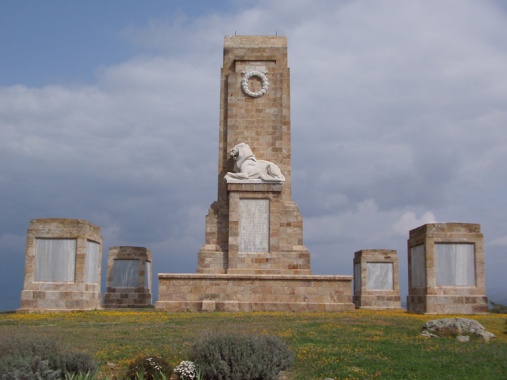 Rudd originally served with the 9th Battalion and served in Gallipoli where he arrived on the 8th September 1915 as a draft of 3 officers and 208 men. (Stacke p.105) The Battalion was recovering from the battle of Sari Bair in August, and they held the line for much of the period. During a deterioration in the weather, the 9th withdrew from Suvla Bay on the 19th/20th December 1915; they briefly returned to Helles and covered the final evacuation on the night of the 8th/9th January 1916. As the 9th Battalion were then redeployed to Mesopotamia in February 1916, Rudd seems to have transferred to the 11th Battalion, part of the Allied forces in Salonika.

The involvement of British troops in the Salonika area of Macedonia is a little-known aspect of the First World War and stems from the fighting between Germany’s allies Austro-Hungary, and Bulgaria on one side, and British, French and Serbian troops on the other. The situation in Macedonia originated from the waning of Ottoman power. After the Balkan War of 1912, where Greeks, Serbs and Bulgarians had ethnic involvement in the Macedonia area, Bulgaria was defeated by the combined forces of Serbia and Greece. Serbia took control of northern Macedonia, while Greece took control of southern Macedonia including the city of Salonika. A treaty decreed that Salonika should be available to Serbia as a commercial port, and a rather uncertain treaty was drawn up between the two.

At the outbreak of the First World War, Austrian armies attacked Serbia, while political tensions between the Royal family and the government in Greece insured her neutrality. By the autumn of 1915, a combination of German dramatic pressure and the negative impressions made by British difficulties in the Dardanelles induced Bulgaria join with the Central Powers and invade Serbia from the East. The Serbian government were struggling to resist this onslaught and appealed to the other Allies for help. The only way troops could be placed in a position to help Serbian forces, was by the city of Salonika, still technically a part of central Greece. The first Allied troops were deployed in October 1915 including the British 10th Division newly withdrawn from Gallipoli. This deployment came too late, where after fighting at Kosturino on December 7th, British and French troops withdrew towards Greek territory; the Bulgarian forces followed but halted at the line of the Greek frontier.

Before this defeat, a further four British divisions from France, the 22nd, 26th, 27th and 28th, had embarked as reinforcements: the 26th Division included the 11th Battalion Worcestershire Regiment. The Battalion was embarked at Marseille on November 11th, 1915, aboard HMS Mars and HMS Magnificent, and the Battalion arrived on November 24 at Salonika. Battalion marched to Lembet, some 2 miles from the city on December 11th. The threat of a Bulgarian advance forced British and French troops to begin the hasty construction of defensive entrenchments around the city of Salonika at a distance of about seven or eight miles. The 26th Division defended the section from Langasa Lake along the northern slope of the Derbend Ridge, and the 11th Worcestershire held the line from Laina. No attack developed, and the Battalion moved to reserve positions. The defence line was reconsidered when the defeat of the 10th Division was realised, and the entrenchments were moved further back.

The British forces were consolidated throughout the end of 1915, by the arrival of the transport and further artillery. Enemy air raids were frequent but apart from that there was very little actual fighting into the spring months of 1916. British and French troops took the time to train extensively, despite the severe weather and the endemic disease: malaria and enteric fever particularly characterised the experience of soldiers on the north Macedonian front.

The circumstances of Private Rudd’s death are detailed in Stacke’s regimental history:

In June 1916, orders were received to begin advance towards Bulgarian forces. The French army pushed towards the Serbian / Greek frontier and attacks were planned on the strong positions made there by the Bulgarians, centred on the small southern town of Dorian. The 78th Brigade were charged with the seizure of a prominent feature known as “Horseshoe Hill”. The Battalion undertook some aggressive patrolling in the middle of August preceding the attack on the position, but the actual attack was made by the 7th Oxford and Buckinghamshire Light Infantry. The Worcestershires took over the captured position and suffered several casualties from fierce enemy artillery fire, before being relieved over a week later.

By that time the opposing lines were close-locked. All along the front, the Bulgarians had been forced back from their outpost positions on to their main line of entrenchments. But among the rocky ridges and gullies the exact positions of those enemy entrenchments were not easy to locate, and for some further weeks, patrols and raiding parties were engaged in testing the strength of the enemy’s defences. In the valley north-east of ” Horseshoe Hill” lies the village of Doldzeli. On the far side of Doldzeli a low rounded under-feature had been named, by the French, the ” Mamelon.” That height was known to be held by the Bulgarians, but their exact strength there was uncertain. That part of the front line was taken over by the 78th Brigade at the end of September. The 11th Worcestershire were at first kept back in Corps Reserve, and did not come into the Brigade Sector until October 2nd; on which date the Battalion took over reserve trenches about Hill 42Q(g). On October 8th the Worcestershire moved forward and relieved the 9th Gloucestershire in the forward trenches near Doldzeli village. The front held by the Battalion extended from the eastern slope of ” Horseshoe Hill ” to the wooded Vladaja ravine, which was held by French troops. On October 9th orders were received to make a small raid against the ” Mamelon ” with the object of capturing a prisoner and thus identifying the troops in front. About 4.30 p.m. while still daylight, the raiding party—Captain P. A. Leicester, Lieutenant C. E. Turner, and 30 other ranks— pushed forward, up the Doldzeli ravine to the slopes of the ” Mamelon.” The party got within a short distance from a trench held by the enemy and charged. They were met by a fierce fire from about 70 rifles and by many bombs. One bomb killed Private J.W. Rudd, another wounded Captain Leicester and two of his men. After a short fight, it was realised that success was impossible and the raiders fell back behind cover. Then it was found that Private Rudd was missing. Believing him to have been wounded and left behind, Lieutenant C. E. Turner, accompanied by Private W. Hartland, bravely went back. They found Private Rudd dead within a few yards of the enemy’s trench. After running the gauntlet of a sharp fire they re-joined the rest of the party(a). Next evening (October 10th) further efforts were made to locate the enemy’s position. A patrol under 2nd Lieutenant F. S. Shaw made a useful reconnaissance, with some loss (b).

(a) For their gallant conduct in this affair Captain Leicester was awarded the Italian Silver Medal ” for valour,” Lt. Turner the French Croix de Guerre and Pte. W. Hartland the M.M.

James Walter Rudd has no identified grave and is commemorated on the Dorian Memorial, Greece.

Charles Ernest Turner was born in 1895, and enlisted in November 1914; he was gazetted a Lieutenant on the 16th August 1915 and served with ‘A’ Company 11th Worcesters in Salonika from October 1915. He was wounded by a shell in the right arm on 12th November 1916 and received the Legion d’Honneur and Croix de Guerre in May 1917. He  joined the RFC / RAF and served with 57th Reserve Squadron in Egypt, was demobilised in July 1918, but returned to the RAFVR in June 1940.

Pte William Hartland 16616 was born in 1893, probably at Hoobrook near Kidderminster; he enlisted 8th September 1914 and served with ‘A’ Coy of the 11th Worcesters in Salonika from September 1915. He was wounded by shell fragments in the face on the 14th January 1917, and a bullet in his right chest 26th April. He was discharged wounded in June 1918.